September 03, 2010
KIEV, Ukraine -- Ukraine is willing to give Russia joint control of a pipeline to southeastern Europe in exchange for access to natural gas supplies, Prime Minister Mykola Azarov said as the countries negotiate a gas venture. 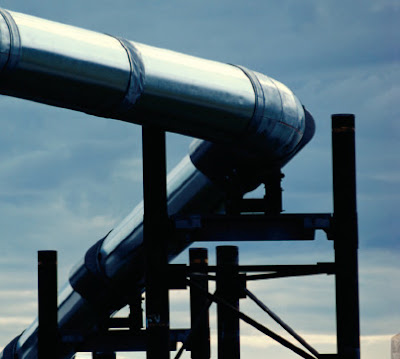 The governments are seeking to create the venture between NAK Naftogaz Ukrainy and OAO Gazprom, both of which were once part of the Soviet gas monopoly, by year-end, Azarov said in an interview in his Kiev office yesterday.

The agreement would reduce the price Ukraine pays for Russian gas, he said.

“I have a hope that we will meet the year 2011 with a new gas agreement,” Azarov said. The current price calculation “means we are doomed to have an unfair price.”

Ukraine needs to cut energy costs as it phases out subsidies to comply with a $15.2 billion loan program from the International Monetary Fund.

Twice in the past four years Russia cut off gas shipments to Europe that flow through Ukrainian pipelines because payment disputes.

Azarov’s predecessor, Yulia Tymoshenko, signed a 10-year gas supply and transit contract with Russia in 2009, ending a two-week halt in deliveries to Europe in freezing temperatures.

In April, Russia agreed to reduce the price it charges Ukraine by $100 dollar per 1,000 cubic meters of gas in exchange for the extension of a lease on a Black Sea naval base.

The proposed venture would allow Russia to upgrade the pipeline that supplies the Balkan region, eliminating the need for the proposed South Stream project that would go around Ukraine, Azarov said.

Upgrading the southern pipeline link to the Balkan region “is a very promising project,” Azarov said. This “will allow Russia to transit fuel reliably to Bulgaria and to implement the South Stream project, only on our territory,” he said.

The project would be “mutually profitable” and provide Ukraine with “transit guarantees” Azarov said.

He declined to provide specifics on how joint control of the pipeline would work or what access to Russian gas would mean for Ukraine because the negotiations are continuing. The joint venture should involve renegotiating the formula used to price Russian gas shipments to Ukraine, he said.

While European customers paid an average of $307 per cubic meters in the first quarter, Ukraine paid just $2 less, even though it buys gas at the border and doesn’t pay transit fees, Moscow-based Troika Dialog said last week. Ukraine’s price dropped to $236 in the second quarter after the $100 discount.

“On the basis of this plan, we would be able to agree on a revision of the disadvantageous 2009 agreements, which are advantageous to us,” he said. “We are not striving for any privileges or discounts, but we should not buy gas at a price that is higher than Germany or Austria.”

The proposed gas venture is only one area in Ukraine and Russia are increasing cooperation. Russian President Dmitry Medvedev will meet with Yanukovych later this month in eastern Ukraine.

Ukraine is offering Russia partnerships in industries including nuclear energy, aviation and aerospace, Azarov said. Other cooperation plans include a plant to reprocess spent nuclear fuel and modernization of nuclear power plants. The projects “can be very profitable for Russia,” he said.

“We are offering Russia a partnership in many branches of the economy,” Azarov said. “In one project we will have some decline in revenue while Russia will increase profitability, and in another project it will be a visa versa. All in all, this would produce quite a positive result.”