September 29, 2010
KIEV, Ukraine -- Hundreds of people gathered in the Ukrainian capital on Wednesday to mark the 69th anniversary of the Nazi massacre of tens of thousands of Jews. 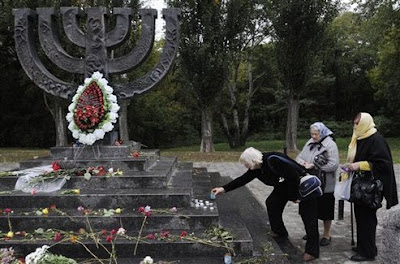 People lay flowers to a menorah monument close to a Babi Yar ravine where the Nazi machine-gunned tens of thousands of Jews during WWII, in Kiev, Ukraine, Wednesday, Sept. 29, 2010. Ukraine marked the 69th anniversary of the 1941 Babi Yar massacre.
President Viktor Yanukovych, government officials and relatives of the victims laid flowers at the monument to those killed by the Nazis in the Babi Yar ravine in the Ukrainian capital, Kiev.

More than 33,700 Jews were shot in Babi Yar over the course of two days, beginning Sept. 29, 1941, one of the most horrific killings of the Holocaust.

In the ensuing months, the ravine was filled with some 100,000 bodies, including those of non-Jewish Kiev residents and Red Army prisoners of the Nazis.

One survivor of the massacre, Viktor Stadnik, said that his mother thought they might be sent to Palestine as the Nazis rounded them up. "It would be great if we were taken to Palestine - it's warm there," he recalled his mother as saying as the Nazis were leading them to Babi Yar. Stadnik, who was seven at the time, managed to escape, thanks to his Ukrainian neighbors.

"I cannot think about those days without tears. This crime against innocent people should never be forgiven," said Tamara Kovalenko, a 73-year-old Ukrainian whose aunt was killed together with her Jewish husband. Kovalenko said that her mother had been hiding a Jewish girl during the Nazi occupation.

The exact death toll at Babi Yar remains unknown. In 1943, as the Red Army approached to free Ukraine, the Nazis ordered Jewish prisoners to dig up the corpses and burn them.

For decades, the Soviets maintained silence about what happened in Babi Yar. Only after Russian poet Yevgeny Yevtushenko drew international attention to the massacre with his 1961 poem "Babi Yar" did the Soviets put up a monument.