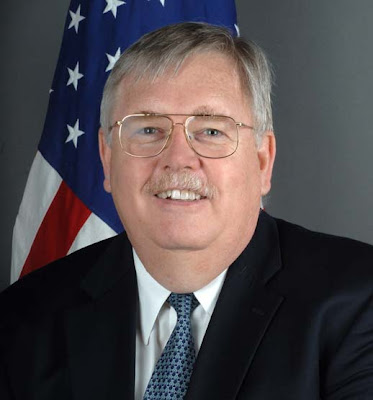 U.S. Ambassador to Ukraine, John F. Tefft.
“Such allegations are clearly absurd. The United States has consistently supported freedom of the press and rule of law in Ukraine and everywhere in the former Soviet Union,” Tefft told the Kyiv Post on Sept. 22.

“As the Gongadze case enters the trial phase, we will continue to speak out in our efforts to ensure that those actually responsible for ordering his abduction and murder will be brought to justice and to support journalists everywhere who work to inform the public and expose corruption and injustice.”

Tefft’s comments came amid a flurry of major developments this month in the 10-year-old murder of Gongadze, a hard-hitting journalist who was kidnapped, murdered and beheaded on Sept. 16, 2000.

The nation’s highest officials at the time, including Kuchma, have been implicated in ordering Gongadze’s murder and involvement in the subsequent cover-up.

On Sept. 14, prosecutors announced their conclusion that Interior Minister Yuriy Kravchenko – a close Kuchma subordinate who died mysteriously from two gunshot wounds to the head on March 4, 2005 – had ordered Gongadze’s killing.

The finding was, according to prosecutors, based on the confession of former police general Oleksiy Pukach, jailed in the case since his arrest on July 21, 2009.

Pukach also implicated Kuchma and parliament speaker Volodymyr Lytvyn in the crime and cover-up, according to Valentyna Telychenko, a lawyer for the slain journalist’s widow, Myroslava Gongadze. Lytvyn served as Kuchma’s chief of staff when the murder occurred.

Prosecutors, through spokesman Yuriy Boychenko, confirmed to the Kyiv Post on Sept. 23 that the pre-trial investigation into the murder has been prolonged until Dec. 14. But they refused to discuss whether Kuchma, who ruled from 1994 to 2005, and Lytvyn are suspects.

Asked if prosecutors are investigating whether Kravchenko could have received orders from superiors to murder Gongadze, Boychenko said such details are part of the ongoing investigation.

Kuchma and other top officials were allegedly recorded as plotting ways to get rid of Gongadze, whose critical articles on Ukrainska Pravda had irritated the administration that throttled press freedom throughout much of its authoritarian rule.

Kuchma has always denied any involvement in Gongadze’s murder, or in any of the other numerous crimes he was allegedly caught plotting on hundreds of hours of secretly recorded conversations made public by his former bodyguard, Mykola Melnychenko, in 2000.

Kuchma, as he has in the past, continued on Sept. 15 to blame the murder and the Melnychenko tapes on a foreign power, then went on to add that agents from the U.S. Central Intelligence Agency were present at [anti-presidential] demonstrations following Gongadze’s disappearance.

“It’s an international scandal designed to compromise Ukraine,” Kuchma said. “They didn’t give me or Ukraine any peace for five years. This was paid for. Money makes everything possible.”

Tefft, however, also noted that former U.S. Ambassador to Ukraine Carlos Pasqual refuted similar allegations in 2001. “The interest of the United States is a dynamic, vibrant Ukraine, a Ukraine with a strong economy, a Ukraine which is pluralistic, in which there is real competition of ideas and views,” Pascual said at the time.

The same holds true today, Tefft said. “There’s no basis to [this allegation] at all,” he said.

Serhiy Lyovochkin, President Viktor Yanukovych’s chief of staff and a former top Kuchma aide, defended the ex-president’s statement without saying whether the current administration also believes that Gongadze’s murder was a foreign provocation.

“Kuchma is a politician with a vast amount of experience. He likely had grounds to say this,” said Lyovochkin, who served as Kuchma’s assistant in 2001 and top aide in 2002-2005.

At the same time, the Yanukovych administration has called on law enforcers to thoroughly investigate the Gongadze case. Lyovochkin said that it would not be good if the entire crime is “hung on one person.”

In the Sept. 15 remarks, Kuchma also said that he is satisfied that the United States under President Barack Obama has changed its view of the world and is no longer trying to spread democracy around the world.

Tefft, in an interview with the Kyiv Post, refuted such a notion.

The ambassador, who arrived in Ukraine last year after serving in the former Soviet republic of Georgia, said the United States remains as committed as ever to promoting the independence, sovereignty and territorial integrity of Ukraine.

“We say this over and over again because we mean it,” Tefft said. “It’s been the same through successive presidents. Ukrainians from all walks of life and all political persuasions understand that.”

Here are other excerpts from the Sept. 22 Kyiv Post interview with Tefft:

* While acknowledging that Obama is focused on U.S. economic recovery, and the wars in Iraq and Afghanistan, Tefft said better relations with Ukraine are as important as ever. “We’re not giving up. I sometimes find it amusing that some of my Ukrainian friends are asking: ‘Are you guys quitting? Are you guys really withdrawing from Ukraine?’ I say: ‘Absolutely we’re not giving up.’ I think there’s a perception sometimes that the [U.S.] ‘reset’ policy with Russia means that Ukraine is not getting as much attention. That is not true,” Tefft said.

* About whether Ukraine can move forward without confronting the great unsolved crimes of the past: “Those historical wrongs don’t go away. They need to be righted for every society,” he said.

* About Georgia’s success in improving its investment climate, economy and in cutting corruption: “The United States worked really hard to help them develop their reform program and to help them do the things that are, frankly, helping make that country an economic and, I think, political success. For example, Georgia is now in the top 10 or 15 in the World Bank survey for ease of doing business.”

* About whether human rights in Ukraine still matters to the United States: “Human rights does matter…We are concerned about democracy. We don’t want to see backsliding. We stand for media freedom. We raise these issues repeatedly.”

* About the future of exchange programs – such as the Future Leaders Exchange Program for high school students and scholarships for university students – that send roughly 1,000 Ukrainians to America each year: “Our goal is to try and get as many young people to the United States as possible.”

* About RosUkrEnergo, the controversial gas intermediary part-owned by Russia’s Gazprom, Ukrainian billionaire Dmytro Firtash and others: “We’re concerned about corruption and the way the process in society works. We also want to see a more open market here for big energy companies. We think it is in Ukraine’s interest. The green light is on for the potential of bringing Western majors to deal with offshore oil and gas, shale gas, coal and methane.”