A Strategic Opportunity For Ukraine 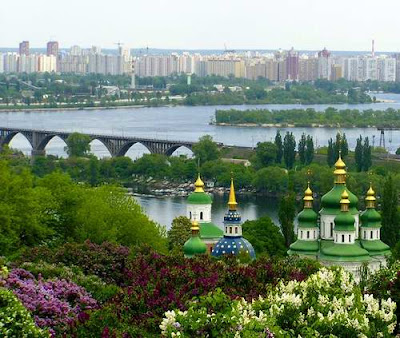 Kiev's famous onion domes.
And stretching skyward from the crests of Kiev’s famous seven hills are its unmistakably Slavic monuments—the onion domes and golden crosses of St. Michael’s and St. Sophia’s cathedrals, and the Caves Monastery.

This ancient and modern city between East and West has a style all its own, which locals call “Kiev eclectic”—a charming blend of the many influences that have shaped this place for more than a millennium.

Kiev’s eclectic architecture is a convenient metaphor for Ukraine itself—a country that blends influences from the Latin and Orthodox worlds, from the Black Sea and the Steppe, in a rich and complex political culture.

Like the city of Kiev, Ukraine’s politics may be tumultuous and notably short on organization and strategic planning, but they exude a sense of energy and potential nonetheless.

As Kiev has expanded upward and outward in recent years, with high-end cars, swanky restaurants, and nightclubs seemingly on every corner, Ukraine as a whole has begun to feel its oats as a large and important country in Europe.

However, as the double digit economic contraction of 2008-2009 illustrated, the easy gains of the post-Soviet period have come and gone, and now, without a more robust strategy for growth and development, the future is bound to be less bright.

Ukraine stole the global media spotlight with its 2004-2005 “Orange Revolution,” when tens of thousands of citizens took to the streets, camping out on Kyiv’s Independence Square, to protest alleged manipulation of the polls by the outgoing president, Leonid Kuchma, and his Russian allies, in support of then-Prime Minister Viktor Yanukovich.

Whereas Kuchma and Yanukovich tended to enjoy support from Orthodox Christian Russian speakers concentrated in Eastern and Southern Ukraine, more Yushchenko and Tymoshenko backers came from Ukrainian-speaking Catholic areas in the West and North.

However, a majority of Ukrainians, drawing on ethnically mixed populations in Kiev and central Ukraine, initially supported the Orange government because they believed in its platform of government reform and engagement with the West.

But the story of the Orange period in Ukraine unfolded with ever more missed opportunities, paralyzing political infighting, and dashed hopes. Most of the promised reforms never occurred, or were compromised from the outset by still rampant corruption.

And though Yushchenko managed to win many admirers in the West, his headlong drive for NATO membership antagonized Russia. By the end of the decade, even many of those who had braved the bitter cold to support the Orange revolutionaries five years earlier had abandoned Yushchenko and Tymoshenko.

This was just the opening needed for Yanukovich and his Party of Regions to stage a dramatic comeback. Promising stability first—and trading on his own ethnic ties to Russian-speaking Eastern Ukraine, including the stereotype of leaders from the Donbass mining region as effective managers—Yanukovich won the presidency and control of the Verkhovna Rada (Ukraine’s parliament) earlier this year.

Since Yanukovich came to power, the debate on Ukraine in Washington has focused almost exclusively on the country’s East-West divide, Russia’s rising influence, and the new president’s apparent aim to establish a tightly controlled, Russian-style political system.

Although Ukrainians recognize and bemoan the risks of regionalism, rampant corruption, and Russian encroachment, their top priorities are renewed stability and economic recovery.

There is a chance both visions will be borne out, and stability will come at the cost of a political system drifting toward authoritarianism, the sort of bargain on which Russia’s Vladimir Putin built his “vertical of power.”

Yanukovich may seek to strengthen central authority, but he is unlikely to give too much away to Russia, since his own ambition would be poorly served by ceding Ukraine’s sovereignty or playing second fiddle to the Kremlin.

The real challenge facing Kiev today is to deliver on the promise of effective government in the short term, without sacrificing Ukraine’s long-term strategic interests. Unfortunately, it’s been the other way around so far.

On foreign policy, the closest thing to a national strategy has been Ukraine’s professed interest in partnership even though it is not willing to align with Russia or the West: Kiev will not join any regional security block, but will still cooperate with NATO and Russia in cases where it makes sense to do so.

Thus far, Kiev has indeed struck a careful new balance with Russia and the West. In all likelihood, Yanukovich believes that by extending Russia’s lease on the Sevastopol naval base to 2042, and entertaining proposals to merge Ukrainian and Russian gas, nuclear, and aircraft industries, he has avoided a more hostile Russian takeover attempt of Ukrainian industry.

Likewise, by continuing military-to-military cooperation with the West, and announcing wide-ranging reform initiatives, Ukraine’s president may hope to encourage Washington and Brussels to turn a blind eye to plundering and corruption by his inner circle.

Whether or not these maneuvers balance one another in the short term, they represent a triumph of tactical over strategic thinking and attest to the glaring absence of an independent strategic direction in Ukraine’s foreign policy.

A similar absence of strategic thinking is evident in Kiev’s domestic policy agenda. Although the improving global economic climate and substantial international loans will probably help Yanukovich deliver a portion of the stability and recovery he promised, Ukraine’s economic future lies with Europe, already Ukraine’s second-largest trading partner after Russia, and a promising source of investment and high technology.

Yet without deep structural reforms in Ukraine’s economy, European integration will remain a slight possibility.

Ukrainian officials, however, continue to use Europe as a scapegoat, arguing that the EU’s unwillingness to give Ukraine a road map to membership saps the popular support necessary to fight corruption, reform state contracting and subsidies, and impose budget cuts across the board.

This is simply wrong. With or without EU membership, Ukraine must reform its red-tape laden regulatory system, increase transparency, and protect small- and medium-sized businesses from plundering. Otherwise, the country’s best and brightest talent will continue to depart for greener pastures in the West, or simply tune out from public life, perpetuating a cycle of social, political, and economic stagnation.

Now more than ever, Ukraine needs strong, sustained engagement from the United States and Europe to encourage its leadership to think strategically. Europe can start by calling Kiev’s bluff and presenting clear, objective standards for Ukraine to meet if it wants closer economic integration and reduced barriers to eventual EU membership.

This, at least, can strengthen voices within Ukraine already calling for the reforms necessary to move toward European integration.

The EU’s newest members in Central Europe should also extend a hand to Ukraine and help mount a diplomatic and public relations campaign to combat insidious anti-Slavic prejudice in “old Europe.”

And even if a road map to EU membership is not possible, Europe should push to conclude a visa-free travel agreement that will enable Ukrainians already working in the West to travel home more easily; they will bring back their personal experiences of more accountable government, while European companies will enjoy better access to a highly skilled Ukrainian labor force.

The United States has a perfect vehicle for robust engagement in the U.S.-Ukraine Strategic Partnership Commission, created at the tail end of the Bush administration but still relatively anemic.

Under the auspices of Commission working groups on economic cooperation, science and technology, and governance, the United States should provide Ukraine with consistent models and programs demonstrating the linkage between accountable, transparent governance and highly successful U.S. research, entrepreneurship, and industry.

The United States can also incentivize reform by pushing hard to protect the interests of U.S. investors already in Ukraine, while encouraging U.S. capital markets to take an interest in mid-sized Ukrainian enterprises as a bulwark against hostile takeover attempts by Russian business.

Lastly, as the key guarantor of European security and a lead NATO ally, the United States must hold Ukraine to the high standard of a pivotal regional power. After the U.S.-Russia “reset,” joint U.S./NATO military exercises with Ukraine and even with Russia should be seen as mutually beneficial.

Indeed, the United States, Europe, and Russia should all demand that Ukraine actively participate in anti-trafficking and border security programs in the Black Sea region, and play a prominent, proactive role in the resolution of ongoing regional conflicts, particularly in neighboring Moldova.

U.S. and European efforts to foster strategic thinking in Ukraine will not pay off quickly, but it is worth their time and attention. Mirroring the architecture of its capital city, Ukraine as a whole is an eclectic and sometimes chaotic place, but it is full of beauty, energy, and potential.

Much of what has already been built was done haphazardly, often with the taint of corruption and abuse of power. But that’s no reason to tear it down or turn away from it.

What’s needed now is to help Ukraine adopt a strategic vision on which to build the next chapter of Ukraine’s fascinating story. America, it has been said, was founded as a “shining city on a hill.” Kiev has seven hills already—now it needs to shine.