September 22, 2010
KIEV, Ukraine -- A senior prosecutor will investigate a claim that police beat and severely injured a journalist employed by the US media group Radio Liberty, the Interfax news agency reported Tuesday. 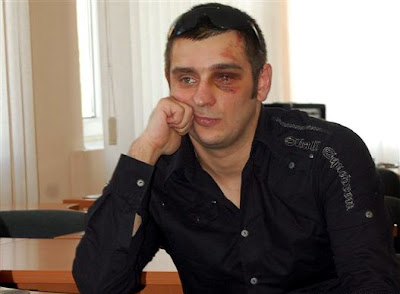 Donetsk journalist Artem Furmaniuk says he was beaten by the police.
Law enforcers in the east Ukrainian city Donetsk beat Artem Furmaniuk and three friends as they were sitting in front of their apartment building, and later at a police station, Furmaniuk alleged in a complaint filed Monday.

Furmaniuk is owner-operator of a news website devoted to exposing crime and corruption in the Donetsk region, and works as a regional correspondent for the US-managed Radio Liberty network, according to the report.

Donetsk police are alleged to have arrested Furmaniuk, his brother, and two friends without reasonable cause or any warning, and struck them with boots and clubs.

A team of eight local law enforcers are alleged to have repeated the beatings in a nearby police station, where he and his friends were held for three hours before being released without charges.

Police also employed pepper spray, and made death threats against the detainees, he said.

The Donetsk police reportedly arrived on the scene because of a complaint that Furmaniuk and his friends were disturbing the peace outside their apartment building.

Furmaniuk, in comments reported by the Unian news agency, linked the alleged police violence with an argument taking place earlier in the evening with persons allegedly claiming to have close friends in the police department.

Violence against members of the media is a continuing problem in Ukraine, which has seen some 40 reporters and editors murdered since the former Soviet republic's 1991 independence.

Ukraine's highest-profile journalist murder took place in 2000, with the contract killing of Georgy Gongadze, the editor of an anti- government web site.