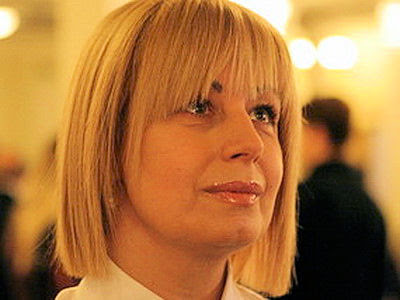 Anna Herman
"I think a lustration would be very useful for Ukraine. The Polish experience has shown an amazing fact: after the lustration it turned out that it was the right-wing camp that had more security officers than the left-wing. I think something similar could happen in Ukraine as well," Herman told journalists.

A lustration "will allow not just to purify the power and to increase confidence in officials, it will also protect those who are sometimes victimized by various sleazy provocations by the press," she said.

"You know how easy it is to make provocations and to accuse someone of having worked for the KGB. It is very difficult to protect oneself from this. If we open [the archives], hold a lustration and publish lists of those who cooperated, that means that those people who did not cooperate will be guaranteed that no one would upset them in this country," the deputy chief of the presidential administration said.

Herman made such statements on Friday after attending an exhibition about the East Germany's secret service (Stasi), which opened in Kiev.

The secret filed can be declassified while people mentioned in them are still alive, she also said.

"I am not supporter of the idea that documents should remain classified as long as people named therein are still alive," she said.

"One has to know the truth, no matter what it is like and whoever might be involved, and one has to answer for the truth," she said.

"Our society needs to be purified. So far there are no such statutory acts and today we cannot force the Security Service to break the law. I suggest passing legislation for these documents to be handed over to institutions, in particular, the Institute of National Memory. It will be done," Herman said.