Misapprehensions Abound Ahead Of Euro 2012 In Poland And Ukraine

September 06, 2010
BONN, Germany -- One host country won't be ready for the tournament, and foreigners in the domestic league will doom England. Those are just two bits of nonsense being spread about soccer's next big competition. 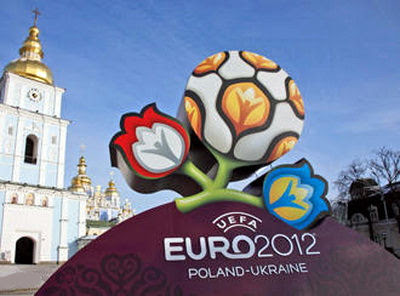 Every major sporting event spawns a host of speculation, misconceptions and out-and-out falsehoods - and the 2012 European Football Championship is no exception. Deutsche Welle puts three current ones under the magnifying glass.

Games will be moved to Poland or maybe even Germany

A lot of ink has been spilled about Ukraine's lack of infrastructural progress, with some people even surmising that UEFA could relocate some matches, perhaps to stadiums in the eastern part of Germany.

As welcome as such a scenario might be to German football fans, this is pure wishful thinking.

Concerns about a host country's readiness to host a major sporting event regularly surface when tournaments are held outside the leading industrialized nations. They were part of the run-up to the 2010 World Cup in South Africa and even the 2004 Summer Olympics in Athens.

Both of those events went ahead exactly as planned, and there's no reason to expect anything different with Ukraine. Indeed, after some familiar initial delays, organizers are already working overtime to ensure nothing - not even the weather - disrupts their schedule.

"What we're trying to do is build as fast as possible to avoid the winter time, which could start earlier this year," the Portugese director of construction at Kiev's Olympic Stadium, Jitesse Arquissandas, told DW-TV. "That's why we are starting in October. So we're a bit faster than was planned."

Moreover, UEFA officials say that even the stadium in Lviv - the venue of most concern - is now making adequate progress, and in November of last year, the association confirmed that those two cities, together with Donetsk and Kharkiv, will be hosting matches.

Barring some sort of natural or social catastrophe, that's the end of the story.

Michael Ballack to lead Germany at the tournament

Germany coach Joachim Loew seemed to decide what's become known as "the captaincy question" in Ballack's favor last week, but a closer look at what he said reveals that only a basic principle has been set in stone.

"At the moment, Bastian Schweinsteiger and Sami Khedira are our defensive midfield," Loew told his players ahead of their 1-0 qualifier win over Belgium on September 3. "But if Michael comes back and makes the squad he'll be captain. If Michael doesn't play, Philipp [Lahm] is the captain."

In other words, Ballack's position in the squad is by no means guaranteed. His form will have to improve to earn any further call-ups, and he'll have to supplant one of the two regulars to regain the captain's armband.

How likely is that? Lahm, who previously said he was not going to relinquish the German captaincy voluntarily, seemed perfectly happy with the arrangement.

It was a clever way for Loew to defuse a potentially disruptive situation, and one that makes it more likely than not that Lahm will lead Germany onto the pitch in 2012.

This was a conclusion lots of people in England drew after the Three Lions put in yet another underwhelming performance at the World Cup. The English FA has since instituted a rule that all Premiership clubs have to include a certain number of English or "home-grown" players in their squads.

But the connection between successful national teams and domestic leagues is practically non-existent.

The percentage of foreigners at the top clubs in Spain's Primera Division and Italy's Serie A has been only slightly smaller in recent years than in the Premier League. Nonetheless, those national sides won the last Euro and the previous two World Cups.

Moreover, three of the past five winners - Greece in 2004, France in 2000 and Denmark in 1992 - had a majority of legionnaires in their starting teams. Germany, too, won the Euro in 1996 after a Bundesliga season in which three of the top six scorers were foreigners.

The number of foreign players in the Premiership is not what's holding England back. What does hurt the Three Lions is that the league spends less money proportionally on developing young players, especially in those areas - goalkeeping and defense - that are crucial to winning titles.

Peter Schmeichel, Andreas Koepke, Fabien Barthez, Antonios Nikopolidis and Iker Casillas were the starting keepers who won the Euro since 1992. In that time, England fielded an ageing David Seaman, David "Calamity" James and, in failing to qualifying for the 2008 event, Scott Carson.

Joe Harte is latest keeper to take over what has been this thankless task, and at least on paper he represents an improvement insofar as he plays for one of the top sides in Premier League, Manchester City.

So if England do manage to break their string of failure in Poland and Ukraine, it will be more down to him than to misguided efforts to make the Premier League more English.