September 12, 2010
CARPATHIAN MOUNTAINS, Ukraine -- Imagine the Girl Guides with racier uniforms accessorised with pickaxes, chains and scythes and what have you got? Answer: a women's youth movement sweeping Ukraine. 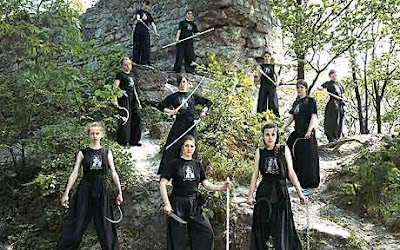 Girls at the Asgarda summer camp.
It's 5.30am and dawn is breaking in the Carpathian Mountains. Morning mist garlands the mountaintops as the sun rises over a view that's as old as the hills: headscarved babushkas push carts of hay by hand, white-tailed eagles circle drowsily above and the air is scented by the ancient spruces of Europe's last stretch of virgin forest.

Only the rumble of cargo trains driving west to Hungary disturbs this bucolic scene. That and the peals of three bikini-clad girls as they jump into the frigid Dniester, the fast-flowing river that courses south across the length of eastern Ukraine to the Black Sea.

Katya Rebrova, 22, Yulia Serafiniora, 20, and Daria Rodnar, 15, have been up since 4.30am, practising a peculiar martial art involving weapons that closely resemble agricultural scythes; the curved blades slice though the crisp morning air as they swivel and high-kick with blurring speed.

Their dress, before they strip for their daily pre-breakfast dip, is similarly exotic to Anglo-Saxon eyes – the baggy tight-ankled trousers of the traditional Cossack warrior teamed with cropped sports tops and swinging plaited hair.

It's a striking mixture of ancient and modern that embodies the Asgarda, a new women's movement that – against steep odds – is attracting attention in Ukraine, where 80 per cent of the unemployed are women and domestic violence is common.

I am joining the Asgarda – the name derives from Asgard, the city of the gods in Norse myth – at the focal point of their year, a two-month-long summer camp.

Here, girls and women from across the country meet to study history, life skills and the aforementioned Cossack martial art, Bojovyj Hopak, where not only scythes but Japanese chained nunchucks and pickaxes are regularly wielded. The Girl Guides was never like this.

The drive here, earlier in the week, had taken me deeper and deeper into silent, thickly forested mountain terrain – three hours from Ukraine's second city, Lviv, but almost another world.

I had arrived to an unusual scene.

Besides a wooden cabin, the group's founder, Katerina Tarnouska, a 36-year-old single mother, was pacing the length of a line-up of seven- to 10-year-old girls like a dyspeptic squadron leader, urging them to punch their small fists into the air towards invisible assailants, or drop to their hands and knees for press-ups.

A former PE teacher, Tarnouska is a formidable presence – handsome Slavic bone structure and wheatish skin accented by a tattooed bicep bearing the insignia of the Ukrainian National Movement (a centuries-old resistance movement to Ukraine's many occupiers).

Yet her 200 followers clearly dote on her rousing brand of girl power. Between issuing imperious orders she told me that her charges were heirs to the Amazons: the proud warrior women first celebrated by the Ancient Greeks, said to have hailed from Scythia, to the east of modern-day Ukraine.

Tarnouska set up the Asgarda in 2004 amid the heady days of the Orange Revolution – the youth-led regime change that brought the pro-Western Viktor Yushchenko to the presidency and launched the career of the glamorous economist Yulia Tymoshenko, who became Ukraine's first female prime minister in 2005.

Though this period was a catalyst for a national optimism that in part persists, many of its real gains have now been lost, especially for women.

In February 2010 Yushchenko's government – dogged by corruption scandals and blamed for an economic crisis – was voted out in favour of Viktor Yanukovych, whose government has pursued reactionary politics with brio, clamping down on media freedom and – famously – justifying his all-male cabinet with the line, 'Reforms do not fall into women's competence.'

Yet, in forming the Asgarda, Tarnouska was motivated not by politics but a desire to empower Ukrainian women. 'I wanted girls to gain confidence to be themselves, and not just quiet wives working, working and swallowing all the time their own dreams – the lot of our mothers and grandmothers under the Soviets,' she explains.

'As a nation, too, we're unsure of ourselves, our national identity and history having been suppressed for so many years, or rewritten to fit the communist ideal.'

The way to counter this epidemic of lost confidence, Tarnouska felt, was to remind Ukrainian girls of their nationhood, of powerful figures in history such as the Cossacks.

This warrior race flourished for four centuries and was fêted for its strength, martial skills and fearless independence in the face of the Russian tsars (as well as for its prodigious vodka intake). For many modern Ukrainians the Cossacks have become emblems of a golden era, when Ukraine was free from Moscow's control.

There's certainly no lack of confidence among the girls here today. Now in its fifth year, the summer camp is an opportunity for older members such as Katya, Yulia and Daria to be joined by younger girls, from seven up, who come for two-week courses in 'Asgarda skills'.

Lessons are diverse, ranging from yoga and handicrafts to martial arts and Ukrainian national dance. The older girls receive masterclasses from visiting experts – including Volodymyr Stepanovytch, a Soviet former karate master – and the younger girls are taken on afternoon excursions to historical sites.

Prayers are also an integral part of camp life, held before meals and bedtime, a non-denominational giving of thanks for food and the opportunity to learn. Asgarda membership is free, although those who can afford it pay about 150 Ukrainian hryvnia, or £9 ($19), a day for the camp's bed and board.

I pull up a chair with Katya, Yulia and Daria one evening. Over cups of sweetened black tea, Katya talks excitedly of her dream of training in film and, eventually, being part of developing a viable Ukraine cinema. 'There is nothing on our screens that helps our self-image as Ukrainians,' she says.

'Freedom of the press improved after the revolution, but now it's going back to the way it was, promoting Russian ideologies. And our films are the worst action movies produced by the USA – with pointless violence and swearing. I want to propose an alternative that helps children to learn something of our Ukrainian history.

There's so much to be proud of, but we never see it reflected back on our screens.' The hubris of youth, perhaps, but expressed so gutsily you suspect she'll achieve it.

The others, too, have big ambitions – Daria wants to work to battle the culture of corruption in local politics, and Yulia hopes 'to be a mother and a career woman, but also – always – an Asgarda'. She and Katya are both in relationships. What do their partners make of the girls' commitment to the group? 'My boyfriend is proud of me,' says Katya.

'Mine too,' says Yulia, 'she sees the Asgarda as part of a development of Ukrainian national pride and he also practises martial arts.' None of the girls sees a tension in wanting to marry and start a family and also be members of the Asgarda. 'Although I understand it might be hard work to have a family if I have ambitions too,' says Katya.

I ask the girls what they have gained from their time as members. 'One of the sad facts of modern Ukrainian life is sexual violence, and this worried me as a teenager,' says Yulia, who has been an Asgarda for five years. (Indeed, 49 per cent of Ukrainian women have suffered domestic violence, according to a recent report by the European Union and UN Development Programme.)

'I joined the Asgarda because I wanted to protect myself. Then I saw that I was developing in confidence, and becoming a strong woman, and I don't think I understood how much I'd been holding myself back.'

Daria, a member since she was nine, nods enthusiastically. 'I joined precisely because I wanted to find my confidence. There are a lot of problems among young people in Ukraine: drugs, unemployment and promiscuity. I saw the Asgarda as a positive alternative. My parents say they noticed a huge difference in me as soon as I joined.'

The girls' eclectic costume is detailed in the Asgarda manual, an eccentric tome that runs from traditional sewing techniques to self-defence with an umbrella (the salient point being, it seems, to jab at the assailant's crotch).

The loose-fitting trousers (similar to harem pants) are a nod to the Cossacks but – importantly – practical fighting wear. Embroidered white shirts – which the girls wear for competitions and formal gatherings such as their annual winter performance of martial arts in Lviv – also bear a rich cultural significance using symbols such as the kalyna berry, said to confer prosperity and luck.

A combination of sports and traditional attire is the preferred daywear for most Asgarda at camp, although a few girls work a racier fantasy-warrior look of leather wrist-straps and skirts. Make-up is minimal, shoes are flat for practicality, and hair is worn plaited in the traditional Ukrainian style, or sometimes shaved by way of an initiation ritual.

To understand how much of a statement this aesthetic is you need only walk a few minutes around any modern city in Ukraine. The clothing favoured by most young women is tight and bright, with bunion-inducing heels.

Ekaterina Stupak, a 34-year-old former government worker living in Kiev, explains the provenance of the 'Ukraine look' as she sees it: 'It's everywhere and it's seen as trendy,' she says. 'You go into a government office here and the women have these long painted nails, heels and miniskirts.

My idea is that it comes from competition. After the Soviet regime the gender balance was skewed as so many men had been sent to Siberia, or killed in pogroms, particularly in the west of Ukraine, where resistance to the regime was strongest.'

The message to young Ukrainian women is clear: the ultimate prize is to snare a moneyed man. This priority is expressed, too, in the Kiev nightclub scene. Strip shows are integral to every city nightclub, with chains such as Pink Unicorn offering striptease alongside a diet of Western and Ukrainian dance music.

Young women go 'oligarch hunting' – dressing up to the nines to prowl around these venues or Kiev's well-heeled shopping districts during the day. They walk back and forth,' says Stupak, 'swaying their hips in these tall heels'.

'It's sad, but many women feel they have little choice but to pursue a rich man,' says Anna Hustol, from the Ukrainian 'female rights group' Femen, which has made headlines with direct actions such as 'Ukraine is not a brothel', a demonstration against sex trafficking and sexual tourism to Ukraine.

Gender relations in Ukraine are indubitably strained. Yet the existence of groups such as Femen and the Asgarda shows how far Ukrainian women have come in breaking free from the constraints of the Soviet regime, under which feminism was despised as 'bourgeois ideology'.

Indeed, a few days spent with the happy, politicised and ambitious young women of the Asgarda made me wonder if British girls too wouldn't benefit from such a regime. With many young British women aspiring to the Katie Price lifestyle, perhaps a movement that empowered girls to be martial artists, rather than sex objects, would be a useful antidote.

After a pathetic attempt to master a few scythe skills, I ask the Asgarda what they'd say to young women in Britain. 'To believe in themselves,' says Daria, 'and that women are as strong as men.'

'You are not just a housewife or a girlfriend or an object to look at,' Katya adds, 'you are a person and you can choose your own path.'

Awana Black said…
What a great article; written in a positive manner. I searched for information after seeing a related post on FB.