September 19, 2010
SEVASTOPOL, Ukraine -- The artillery shells that exploded on board a Ukrainian warship during military drills off the Crimean Peninsula, were expired, a source in the Ukrainian Naval Forces said on Saturday. 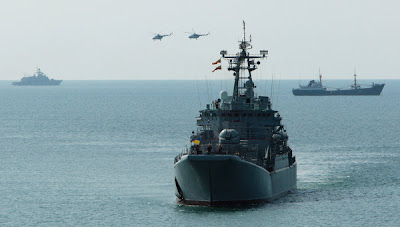 The injured servicemen have been reportedly admitted to hospital in a grave condition.

"Firing expired artillery shells is a common practice that allows to kill two birds with one stone: both to train and to get rid of obsolete ammunition," the source said, adding that the incident would have been prevented if drill monitors had checked the ammunition's expiration date.

"During gunnery exercises, a ship is strongly shaken - even ceiling lamps in corridors fall down. It's quite possible that the expired shells detonated. Fortunately, they were quite small, and no one was killed," he said.

Ukraine's defense authorities have provided no official comments over the incident. UNIAN said the defense minister, Mykhailo Yezhel, had been supervising the drills on Friday.

In 2008, during military drills off the Crimean peninsula, a missile exploded just seconds after it was launched from a Buk-M1 (SA-11 Gadfly) missile system. No one was killed in the incident.

Although the Ukrainian military authorities declared the drills "successful," then-Defense Minister Yury Yekhanurov admitted that missiles used by the country's military were "obsolete."