September 14, 2010
KIEV, Ukraine -- Former Ukrainian Interior Minister Yuri Kravchenko ordered the murder of Georgiy Gongadze, a reporter whose headless body was found in 2000, prosecutors said as they closed the investigation into Kravchenko’s involvement. 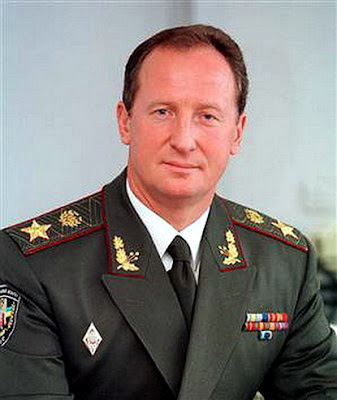 Kravchenko was found shot to death at his country home in March 2005, days before he was scheduled to be questioned by prosecutors. Pukach remains in custody after his arrest on July 21, 2009.

Gongadze, the editor of the Ukrainska Pravda website who had exposed high-level corruption and persecution of government critics, was 28 when he disappeared in September 2000.

His body was found two months later in a wooded area near the capital, Kiev. The body remains in the morgue, awaiting return of the head for burial.

The pre-trial investigation of Pukach is nearing completion, and his lawyers and Gongadze’s family will be informed of the results after Sept. 15, Boychenko said.

The prosecutor’s findings in the Kravchenko investigation were reported earlier today by the Unian news service.