September 13, 2010
KIEV, Ukraine -- Three judges of the Constitutional Court resigned on Friday as the court had been preparing to rule on whether the powers of President Viktor Yanukovych must be dramatically increased. 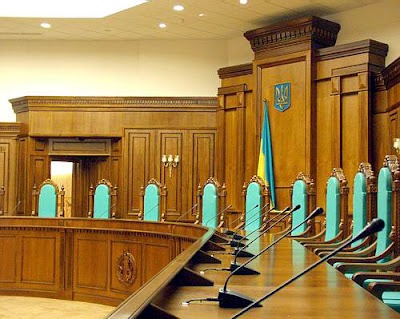 Ukraine's constitutional court.
The latest resignations bring to four the number of judges that have decided to step down over the past 10 days as the 18-member court has been preparing to issue the ruling.

The judges, including Ivan Dombrovskiy, Yaroslava Machuzhak and Anatoliy Didkovskiy, as well as Viacheslav Dzhun, who resigned on Sept. 2, are known for opposing most of Yanukovych’s political initiatives.

The tsunami of resignations at a sensitive time raises questions of whether the judges had been under pressure to quit for disagreeing to support the increasing of the presidential powers.

“They all are well-known legal experts, judges with great experiences,” Serhiy Vlasenko, a lawyer and a lawmaker from the opposition group led by former Prime Minister Yulia Tymoshenko, said in a statement. “Their synchronized resignations cause certain surprise.”

Vlasenko called for an inquiry on what had forced the judges to step down.

“In a normal democratic society resignation of even one judge of the Constitutional Court is a serious reason for discussion in the society,” Vlasenko said. “We have four judges gone, and everybody makes it look like nothing has happened!”

The resignations come as the court is about to rule on whether the powers of the president must be increased by cancelling constitutional amendments approved in December 2004.

The petition calling for the cancelling of the amendments was submitted to the court on July 14 by 252 lawmakers, an almost entire coalition that supports Yanukovych.

Should the court rule on rejecting the amendments, Yanukovych may receive huge powers, such as the ability to fire the prime minister and the entire government, which had been enjoyed by President Leonid Kuchma in 1996-2004.

The petition came after Yanukovych’s attempts to increase his powers through a referendum had failed after many coalition members had apparently decided to quietly sabotage it.

The petition indicates that the Yanukovych administration has chosen the easiest and the most controversial way to try to increase the powers, simply by revoking the previously approved amendments.

The amendments were approved on December 8, 2004 in the middle of the Orange Revolution, as Kuchma has been seeking to reduce powers of the next president, who was likely to be Viktor Yushchenko, the opposition leader and a pro-Western figure.

The amendments have weakened Yushchenko’s powers significantly and created permanent tensions between the presidential administration and the Cabinet of Ministers, often leading to constitutional crises over the past four years.

Parliamentary Speaker Volodymyr Lytvyn, an ally of Yanukovych, said it was unlikely that the resignations had been politically motivated.

He alleged the judges had decided to step down simply to qualify for financial compensation that is provided to them according to law in the event of quitting the job.

“These are huge sums with sizes close to be measured with six digits,” Lytvyn said. “So, that’s why there is no reason to talk about [political] purge.”