Ziuganov: Fees For Basing Of Russian Fleet In Crimea Not High

August 19, 2010
MOSCOW, Russia -- Head of the Russian Communist Party Gennady Ziuganov has said the payment for basing the Russian Black Sea Fleet in Crimea will not be high if Russia and Ukraine revive normal economic relations. 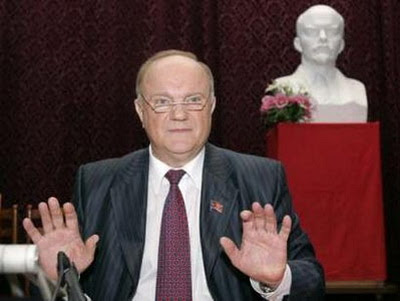 Head of the Russian Communist Party Gennady Ziuganov.
"If we revive normal economic, industrial and business relations, then the price Russia pays today [for the basing of the Russian Black Sea fleet in Crimea] will not be high. And we will all win from this," Ziuganov said at a press conference in Simferopol on Tuesday, where he was on a working visit.

He noted that the Russian Communist Party in the Russian parliament voted for the ratification of the Kharkiv accords.

"Sevastopol and Crimea are sacred places for us. That's why we should make them the grounds for unification, and not an apple of discord," Ziuganov said.

"I believe it is blasphemous to pay money for the basing of the Black Sea fleet, as the sacred in our unity. Russian is forced to pay, and it is blasphemous for Ukraine to take [the payment]. There will be no friendship on this," Hrach said.

At the same time, according to him, the ratification of the Kharkiv accords was a positive event.