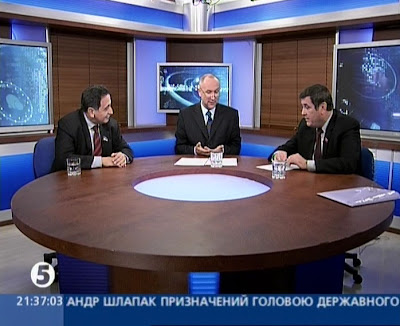 The hackers struck on Tuesday, knocking out the website operated by Channel 5 television, Ukraine's leading news channel and one of the former Soviet republic's few media offering unbiased information.

The Internet assault came against the background of a conflict between Channel 5 and Ukraine's National Committee of Television and Radio (UNCTR), whose members are scheduled on August 26 to consider a reduction in television frequencies available to the channel.

The potential reduction, if substantial, could push Channel 5 off the air. The station routinely broadcasts reports, usually backed by strong evidence, critical of the government and senior officials.

A lawsuit filed by Ukraine's largest TV broadcaster, Inter television, is the grounds for the government review of frequency assignments to Channel 5.

Inter lawyers have argued the number of frequencies available to Channel 5, an Inter competitor, is almost double the bandwidth available to Inter, which attracts twice as many viewers as Channel 5.

Channel 5 executives have alleged Khoroshevsky used SBU intelligence-collection capacities to gather data for the suit filed against Channel 5 by Inter, and claimed Yanukovych officials had warned them to stop airing reports critical of Yanukovych, or risk losing their license.

Pressure on independent media is a recurring feature of Ukrainian politics. Vasyl Klymentyev, a newspaper editor in the east Ukrainian Kharkiv, was reported missing on August 11.

Kuchma's replacement, pro-Europe politician Viktor Yushchenko, was propelled into office in 2004 by mass demonstrations against vote- rigging in favour of Yushchenko's opponent. Channel 5 led reporting on the election fraud.

Yanukovych, a pro-Russia politician, replaced Yuschenko in February. He and his staff have repeatedly asserted their administration, despite links to the Kuchma regime, support a free and open media.

Media watch groups have questioned Yanukovych's commitment. An August 10 letter to the Ukrainian government from the International Press Institute (IPI) said it was "alarmed at reports of an increase in the number of assaults against journalists and a failure to bring the perpetrators of the attacks to justice."