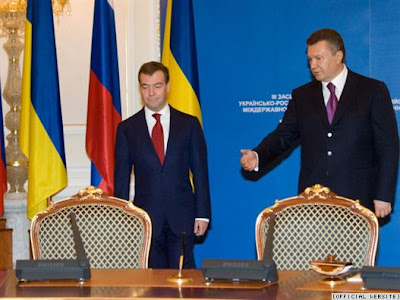 Voloshyn said a special commission will be created in the near future to work on the demarcation of the border.

The agreement on the border demarcation is considered important for the possible introduction of visa-free travel for Ukrainians to European Union countries.

A demarcation agreement was signed by the presidents of Russia and Ukraine, Dmitry Medvedev and Viktor Yanukovych, respectively, in Kyiv on May 17.

Moscow and Kyiv have been at odds regarding the Russian-Ukrainian border in the strait connecting the Sea of Azov with the Black Sea since the collapse of the Soviet Union in 1991.

In 2003 Ukraine officially accused Russia of trespassing upon Ukrainian territory, when Russia began building a dam on Tuzla Island in the Kerch Strait.

The conflict was resolved after the then-presidents of Ukraine and Russia, Leonid Kuchma and Vladimir Putin, respectively, signed an agreement on the joint use of the Azov Sea and Kerch Strait in December 2003.

After the collapse of the Soviet Union, Russia has been reluctant to demarcate its borders with several former Soviet neighbors, namely the Baltic states, Belarus, Kazakhstan, Ukraine, and the countries in the Caucasus.

The longest border in Eurasia, between Russia and Kazakhstan (7,700 kilometers), started being demarcated in May 2009, 18 years after the Soviet Union's collapse.

Kazakhstan and Russia worked for several years to clarify disputed areas of the border. Similar border issues exist between most former Soviet republics.