August 21, 2010
KIEV, Ukraine -- With global wheat prices skyrocketing, and fears of a backlash from voters already high after natural gas prices for households were increased by 50 percent on Aug. 1, Ukraine’s government is mulling grain export quotas to prevent prices on bread and other foods from spiking ahead of the Oct. 31 election to local government bodies. 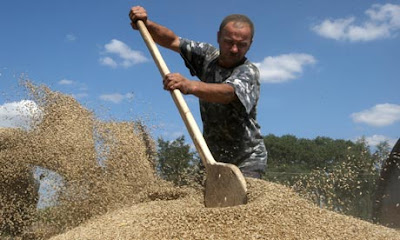 Ukraine’s grain quota strategy could potentially backfire.
But to the surprise of most observers, officials failed to reach a decision on the issue by Aug. 19, despite earlier statements indicating it was a done deal.

World grain prices have leapt by more than 50 percent since June, mostly due to drought in Russia, which prompted Kremlin leaders to completely ban grain exports for the rest of the year. Since Ukrainian domestic prices traditionally track world prices at a discount of around 30 percent, the global price spike has Ukraine’s leadership worried about soaring prices for the nation’s staple food – bread.

President Viktor Yanukovych told reporters on Aug. 18 that the government would take all measures to stop the bread price increasing significantly, but said no one could rule out a minor increase.

Following a government meeting on Aug. 18, at which an export quota decision was expected to be taken, officials postponed action until next week. The Economy Ministry later posted a draft of the government directive under discussion.

While concern over food prices and inflation provide powerful motivation for introducing export quotas, the hesitation may result from financial considerations and commitments to international organizations, experts say.

Although curbing exports is undesireable, so is a surge in the price of bread. High consumer prices could hurt Yanukovych's Party of Regions in the Oct. 31 local eletions. Food expenses constitute about 40 percent of an average household’s budget, but for the poor, it is far higher.

The other side to the argument is that grain exports account for 20 percent of Ukraine’s total exports.

The government has set very ambitious revenue targets for 2010. Fulfillment of these targets is crucial to keeping the budget deficit within 5.5 percent of gross domestic product, the limit agreed with the International Monetary Fund as a condition for renewed lending.
“The quotas discussed could reduce Ukrainian grain export by 29 percent this year, to 11.3 million metric tons of grain, and this will strongly affect profit figures for traders,” said Ivan Panin of Sokrat brokerage.

Traders have naturally expressed fierce opposition to the quotas: “The stated quotas are too low and will have negative effects for the market and Ukraine as a whole,” the Ukrainian Grain Association said in an open letter to Prime Minister Mykola Azarov, published hours before the Aug. 18 government meeting.

The letter called for no measures to be taken before Sept. 15.

It is also unclear how effective quotas might be in keeping down the price of bread.

Analysts point out that Ukraine had high bread prices from 2006 to 2007, at a time when there was a complete prohibition of grain exports. And if Ukrainian restrictions cause global grain prices to spike again, this could have a delayed impact pushing up domestic prices, rather than reducing them.

While export restrictions could keep more grain on home turf and available at lower prices, it would, as in the past, hit Ukraine’s farmers hardest, preventing them from getting top dollar for their grain. In turn, this could trigger a downward spiral, hitting next year’s crop by denting farmers’ resources available for sowing next season’s harvest.

Export quotas could also conflict with Ukraine’s commitments to the World Trade Organization, which it joined in 2008.

“This is why government ministers are stressing that the issue is not the price of bread, but the possibility of a real deficit of grain in the country, i.e. food security,” said Serhiy Feofilov, head of UkrAgroConsult. A threat to food security would justify waiving WTO terms, Agriculture Minister Prysyazhnyuk claimed Aug. 17.

But Feofilov pointed out that, although the overall harvest forecast was down for this year from 2009, the summer heat wave could boost the proportion of the wheat crop attaining high enough quality to be used for baking bread.

These figures could undermine the government's claim that food security, and not just price, is under threat.

According to Volodymyr Klymenko, president of the Ukrainian Grain Association, the baking of “social bread” – the cheapest, most basic sorts such as “batons,” “bricks” and “Ukrainian” – uses only 900,000 metric tons of milling grain per year.

“To keep the price of ‘social bread’ stable, these 900,000 metric tons will suffice,” he said, adding that the state food reserve was by law obliged to stockpile at least 1.2 million metric tons of grain at all times.

Nevertheless, the government claims it is currently restocking depleted grain reserves. “We have set a task to buy 1 million metric tons of bread wheat for the state reserve. We have currently bought about 800,000 metric tons. And 1.5 million metric tons will be purchased for the regional funds,” Yanukovych announced Aug. 18, according to Interfax.

“The government should have bought more grain for its reserves while the price was cheap,” said Mykola Vernitsky of ProAgro consultancy. “Instead, in July, it released 300,000 tons of grain from the grain reserve to traders to pay back VAT rebate arrears, as demanded by the International Monetary Fund. And it did the same in August. Now it has to replenish the reserve at a far higher price.”