August 05, 2010
MUNICH, Germany -- A U.S. military historian on Wednesday testified in the trial of the retired Ohio autoworker accused of being a guard at the Nazis' Sobibor death camp and expressed doubt about John Demjanjuk's account of his whereabouts in the last years of World War II. 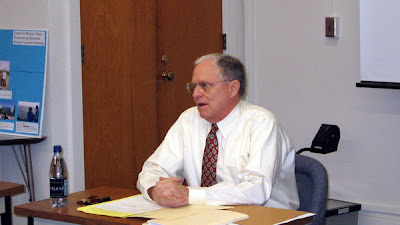 U.S. military historian Bruce W. Menning. The historian previously testified as an expert in 1981, when the Ukrainian-born Demjanjuk had his U.S. citizenship revoked.
Bruce W. Menning told the Munich state court Wednesday that Demjanjuk's claim he went to the Austrian city of Graz late in 1944 to join a Ukrainian force fighting the Soviets under German command was "implausible" as the group only came through the Austrian city in March 1945.

Demjanjuk, who was deported from the U.S. to Germany in May 2009, is being tried on 28,060 counts of accessory to murder. He denies the charges and says he was never a camp guard.

The defense maintains Demjanjuk was a Soviet soldier captured by the Germans and spent most of the war in prison camps himself.

Menning, an expert on the history of the Soviet Union who taught at the U.S. Army Command and General Staff College in Kansas, also questioned other details of Demjanjuk's account.

He said that Demjanjuk's claim he spent some 18 months until October 1944 as a German prisoner of war at a camp in Chelm, Poland, was highly implausible.

Menning said on Tuesday the Germans moved the camp away from the front line by May 1944, from Chelm at the Ukrainian border to Skierniewice in the west of the country.

The historian previously testified as an expert in 1981, when the Ukrainian-born Demjanjuk had his U.S. citizenship revoked after the Justice Department alleged he hid his past as the notorious Treblinka guard "Ivan the Terrible."

He was extradited to Israel, where he was found guilty and sentenced to death in 1988, only to have the conviction overturned five years later as a case of mistaken identity.

Defense attorney Busch said on Tuesday that Menning was not an expert on the Russian or Ukrainian forces allied with Nazi Germany, such as the Shandruk or the Vlasov army. He asserted that Menning was wrong to claim those forces didn't exist until 1945.

He said they were gathering their men months before they officially started their duty — suggesting Demjanjuk could have joined those fighters in 1944 as he claims.