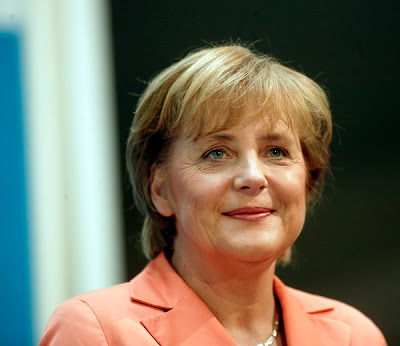 German Chancellor Angela Merkel
"I made clear that with regard to certain democratic areas, in particular in the area of press freedom and the freedom of opinion, we had certain questions," Merkel said after talks with Yanukovich in Berlin.

"We discussed these questions very openly with one another. We also agreed that should there be any such problems in the future that we would be able to discuss them openly and honestly," she told reporters.

Ukrainian journalists have repeatedly warned of deteriorating media rights, saying pressure on reporters has increased since Yanukovich, seen as closer to Moscow than his predecessor Viktor Yushchenko, came to power in February.

On Friday, media rights watchdog Reporters without Borders sent a letter to Merkel asking her to discuss "growing obstacles to freedom of the press" in Ukraine during her meeting with Yanukovich.

The group also called on Merkel to press for a more thorough investigation into the disappearance of journalist Vasyl Klymentyev on August 11.

Ukraine's Interior Minister Anatoly Mogilev said on Thursday that it was likely that Klymentyev, the editor of a small weekly in Ukraine's northern city of Kharkiv specialising in sensational corruption exposes, had been murdered.

More than 100 Ukrainian journalists and artists took to the streets of Kiev on Thursday in a protest against censorship.

Private channels TVi and Channel 5 are currently at loggerheads over broadcast frequencies with one of the main national networks, Inter TV Channel.

Inter TV's owner, Valery Khoroshkovsky, is one of the country's richest businessmen and also head of the SBU, Ukraine's main government security agency.

The newspaper reported that the head of TVi had been spied on by intelligence services, something which Yanukovich has denied.