In The Nerve Center Of The Cold War

August 28, 2010
PERVOMAISK, Ukraine -- We are 100 feet underground. The dark eyes of Edward Idrisovych Sabirov skip around the tiny room. He knows every inch of it. For five years, he waited here for an order that never came: Blow up chunks of the U.S. 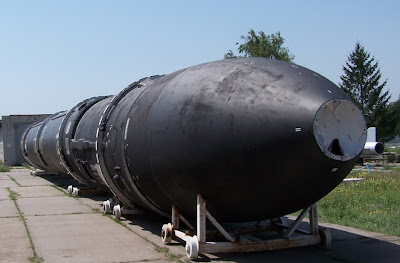 At the climax, he takes visitors by twos or threes into a cramped, gray elevator to descend to the underground command post. The center controlled 10 nuclear-tipped missiles buried in the rich black earth of the Ukrainian steppe.

This journey into the bowels of the Cold War reveals deadly doomsday mechanics. But Mr. Sabirov, who speaks both Russian and Ukrainian, is just as riveting. As he crisply explains his job, this intense man who grew up on the Volga River, east of Moscow, wins my respect.

He has me sit at his old console to go through the final steps required to wipe out several million Americans: Open a little door on the instrument panel. Press the gray button inside.

Nearby, a launch officer at another console presses a similar gray button. Then each launch officer opens another door on his console, revealing a small metal fitting into which each inserts a key. At the same moment, each twists his key while holding down a button.

After a moment of silence, I ask Mr. Sabirov what he thought about when he imagined turning the key.

"Truman," he says, in a flash. "I thought a lot about Truman. You know, he was the one who changed the rules of the game."

The unassuming little museum is about 3½ hours south of Kiev by car. Hawks wheel across the undulating horizon and skylarks sing above lime-green wheat fields.

Missiles and rocket engines surround the low museum building. Its five above-ground rooms display models and mock-ups of how the place operated during the Cold War. Photographs of the destruction wrought by President Truman's decision to bomb Hiroshima and Nagasaki line the walls of the back room.

The tour is in Ukrainian and may seem a bit long-winded, even with a translator. But it is worth the wait for the underground portion of the tour.

The trip to the base's nerve center begins with a walk through 100 yards of drab underground tunnels lined with cables. After a few minutes, we reach the elevator that hugs the side of a 12-story steel silo.

The same size as the missile silos, it was designed to quarter launch crews. The elevator has room for only three or four people at a time. "Please don't touch anything," he says to the rest of us before dropping out of sight with the first party.

When our turn comes, the descent provides plenty of time to wonder what would happen if the elevator malfunctioned. At the bottom, the door swings open on turquoise-paneled living quarters for the men waiting to go on duty. The space is less than 11 feet in diameter.

Three people could sleep and eat here, though typically there were crews of two. The space has the engineered feel of a railroad-car sleeping compartment and holds a small stove, a tiny refrigerator, three fold-down bunks, a drop-down table with seats, a shower, a sink, a toilet. In one corner is a ventilator. Smoking was allowed but drinking was strictly forbidden.

"If you were caught with alcohol, you were sent to a place people never come back from," Mr. Sabirov explains.

On one wall, a steel ladder goes up through a hatch to the cramped command center, where the launch crew sat during its six-hour shifts. The room, beige with a red linoleum floor, bristles with buttons and dials.

We sit at the command consoles as he guides us through the launch sequence. I man the senior station, now marked with No. 1 and a yellow and blue Ukrainian emblem.

Firing required four hands operating at once. The consoles were distant enough to make it physically impossible for one man to fire the missiles. Given that Soviet officers sat in this claustrophobic room for six-hour shifts, year after year, it seems like a very sane arrangement.

As Mr. Sabirov explains the procedures in crisp professional terms, I consider him sitting here in the 1980s, prepared to launch a missile while I was raising two daughters in Miami. I can't remember worrying much about the nuclear threat then, but sitting next to the launch key, I wonder whether I should have worried more.

Until 1991, Ukraine was an integral part of the Soviet Union, and the U.S. Defense Department considered the missile arsenal at Pervomaisk one of the crown jewels of the U.S.S.R.'s ballistic system.

When the Soviet Union collapsed, independent Ukraine inherited an arsenal of 1,900 strategic nuclear weapons. The Russians didn't relinquish the launch codes, but if Ukraine had taken over the missiles and warheads, as it might have, it would have become the world's third-largest nuclear power.

After a lot of back and forth, Ukrainians agreed to give up their nuclear sword. The warheads were shipped to Russia and dismantled. The rockets themselves were destroyed over the next few years.

Two other former Soviet republics, Belarus and Kazakhstan, did the same. Mr. Sabirov says that some Ukrainian visitors to the museum think it was a good idea, but others are sorry "we gave up the rockets."

As for Mr. Sabirov, "I don't get into politics myself." But his nostalgia is clear when he says: "We didn't have jeans, we didn't have butter, they put water in our margarine, but we had the best rockets in the world."