August 14, 2010
KIEV, Ukraine -- As fires burn across Ukraine amid a heat wave, international and local experts have warned of the high risk of a wildfire in the highly radioactive 30-kilometer radius around the closed nuclear power plant. 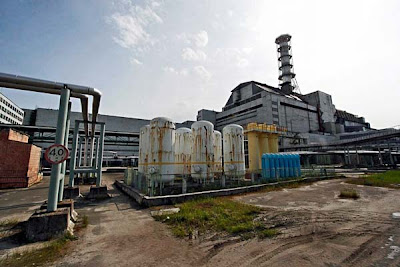 The fourth reactor of the closed Chernobyl nuclear power plant, scene of the 1986 disaster.
A combination of heat, wind, drought and poor forest management could help spread such a fire in the no-man’s-land “exclusion zone” near the 1986 disaster, which remains the world’s worst nuclear power accident. Wildfires there would release radioactivity in smoke clouds.

The scientific consensus seems to be that the particles would not be of sufficient quantity to seriously endanger people’s health, except perhaps for those closest to the blaze.

Although, as with most Chernobyl-related assessments, nobody knows for sure what the fallout would be.

“There is an extraordinary situation in terms of wildfire risk in the Chernobyl exclusion zone,” said Professor Johannes Goldammer, head of the Global Fire Monitoring Center in Freiburg, Germany.

“The danger results from the lack of any forest management in the decades following the accident. Forest has been growing up without any clearance of dead wood. And there are large stretches where insect infestation has created dying forest that could easily burn.

The whole exclusion zone is at risk of fire.” Goldammer, whose institute is the leading European research center on forest fires, said that “repeated meetings” with Ukrainian officials in recent years have not led to a clear policy “to reduce the risk of fire in the zone.”

Lack of money, he said, shouldn’t be an issue as international groups would be willing to provide emergency grants.

Serhiy Vus, head of the department for the Chernobyl exclusion zone at Kiev Regional State Administration, said on Aug. 6 that there was “a normal and stable situation” in the Chernobyl zone, with two fires reported in early August that were quickly contained.

Experts say the harm caused by the radioactive fallout from a large forest fire in the Chernobyl zone would be limited.

“Our conservative model shows that the radio nuclides released in the smoke would remain below critical level and would not pose a risk to the population,” Goldammer said.

“But it would not surprise me that if it turned out to be higher in the case of an extreme fire. The most dangerous aspect would probably result from radioactivity entering the food chain.” Serhiy Zibtsev, professor at the National University of Life and Environmental Sciences in Kiev, had an encouraging assessment.

“The amount would not exceed the critical threshold of danger to the population,” Zibtsev said.

However, localized danger could be serious.

Experts at the German Federal Office for Radiation Protection on Aug. 6 said: “Fires in the Chernobyl area can have radiological effects in the immediately surrounding area if people inhale the radioactive particles in the air.

The level of the resulting radiation exposure depends on the fire and on the individual behavior of these people and cannot be generalized.

However, the fires do not have any radiological consequence for the rest of Europe and Germany, since the dispersion of the radioactive substances is regionally limited. This has been known from former fires in the area.”

The German experts noted that there had been no sign of increased radiation as a result of the wildfires in Russia.

Zibtsev, the Ukrainian professor, said a large-scale fire “could be a catastrophe” in a remote area, if the wind is strong, because of a lack of modern firefighting equipment.

“And remember, once a forest fire reaches 50 hectares, there is no real way of stopping it before it burns out,” he said. While the zone has its own dedicated firefighters, detection of fires remains weak.

Emergency Ministry officials admitted on Aug. 10 that the few inhabitants in the “exclusion zone” impede their ability to spot fires quickly.

“There needs to be automatic detection, including towers with cameras and remote sensors,” Goldammer said. While the health dangers to the general population may not be high, risks could be more serious to firefighters and other workers in the zone who would battle such a blaze.

Oleksandr Klyuchnikov, president of Ukrainian Nuclear Society, who has worked at the Chernobyl reactor since the accident in 1986, said weather conditions would determine whether the smoke was carried to Kiev.

Klyuchnikov noted that radioactivity in the zone has already increased lately, due to more dust created by the extreme heat. Goldammer said Ukraine is on the right track in restricting access to forests and raising public awareness of the issue and the need for responsible behavior.

“All the fires in western Russia were caused by humans,” he said, “ranging from shashlyk fires and dropped cigarettes to farmers burning the stubble off fields.

The lack of people in the exclusion zone therefore reduces fire risk. But we all know that people live in the zone, and also enter the zone especially to hunt and, of course, there is also work going on there. So there should be no complacency on this account.”