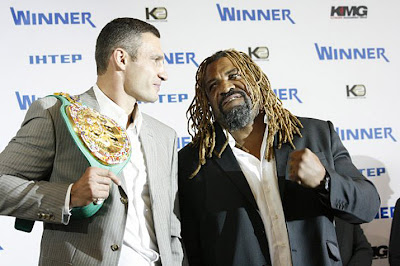 Klitschko shrugged off the threat, suggesting that the fight on Oct. 16 in Hamburg, Germany, will be a test of his own mental strength.

"The only man who can defeat Vitali Klitschko is Vitali Klitschko," he said. But the 39-year-old Ukrainian also admitted, "It will be an amazing, exciting fight, full of drama."

Briggs is the fourth choice for Klitschko, after Russians Nikolai Valuev and Alexander Povetkin — and loudmouthed British heavyweight David Haye — refused the bout.

Haye had been calling out Klitschko and his brother Wladimir for months, but ultimately refused to take the fight when if was offered. Povetkin was the mandatory challenger but backed out at the last minute when his team decided he wasn't ready for Klitschko.

Klitschko (40-2) recognized Briggs (51-5-1) as "one of the most serious pretenders to the title." Briggs won the WBO title with a 12th-round knockout of Sergei Liakhovich in November 2006, but lost the title in his first defense against Sultan Ibragimov eight months later.

Briggs promoter Gregory Cohen said for the 38-year-old asthmatic from New York this is "essentially his last opportunity, and I am certain he is going to make the most of it."

Briggs considered retirement in the wake of the Ibragimov defeat, saying he entered a "diet of cookies, doughnuts and fried chicken" that ballooned him to 335 pounds. It was Klitschko, he said, who inspired his return after the two met in a Los Angeles restaurant.

"I was fat and he touched my stomach. And in that moment right there I decided to come back," Briggs said. "He should have left me alone."