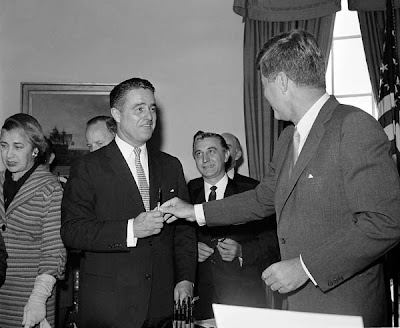 U.S. President John F. Kennedy hands a pen to his brother-in-law, R. Sargent Shriver, after signing legislation at the White House giving the Peace Corps permanent status, on Sept. 22, 1961. Nearly 200,000 Americans have joined the Peace Corps since, serving in 139 countries, making a difference every day.
They are jokingly referred to as the “Posh Corps,” but they also could be called ambassadors of peace. They carry cell phones, have running water in their homes and a McDonald’s restaurant is usually not far away.

They’re U.S. Peace Corps volunteers in Ukraine, lucky enough perhaps not to dig irrigation ditches like counterparts do in less fortunate parts of the globe.

Ukraine is hosting a Peace Corps contingent that is more than 300-members strong, the world’s largest group among 74 countries where the U.S. sponsored volunteers are serving.

The latest batch of them, 72 in total, recently came to Kyiv after 11 weeks of intensive in-country cross-cultural and language training. This group consists of community and youth development volunteers. They are now deployed to various parts of Ukraine, where they will spend the next two years integrating into their assigned communities.

Kate Schimmer, 23, an American volunteer, is a biomedical engineering graduate of New Orleans’ Tulane University. She will teach computer design, safe Internet usage and business computer skills in Solotvyn, a village of 4,000 people in Ivano-Frankivsk Oblast.

Schimmer’s group is part of an effort to help bring the two nations closer together and achieve better understanding. The U.S.-Ukraine partnership began when U.S. President George Bush Sr. signed a bilateral agreement with Ukrainian President Leonid Kravchuk in 1992.

In 1960, as a U.S. senator and presidential candidate, Kennedy made a stop in Ann Arbor, Michigan, and was greeted by more than 10,000 people at the state university there. Kennedy challenged them: How many of them, he asked, would be willing to serve their country and the cause of peace by living and working in the developing world?

From that inspiration, Kennedy started a federal government agency in 1961 (www.peacecorps.gov), devoted to world peace and economic development. Not everyone has welcomed the program and, in fact, some nations have banned Peace Corps volunteers.

On Christmas Day in 2002, the Russian Foreign Ministry stopped renewing and providing visas to U.S. Peace Corps volunteers. The Federal Security Service (FSB), successor to the Soviet KGB spy agency, accused some of the volunteers of spying.

“Among them are persons who were collecting information on the social, political and economic situation in Russian regions, on officials of governmental bodies and departments, on the course of elections and so on,” FSB head Nikolai Patrushev said then.

The U.S. Embassy in Russia dismissed the charges as “groundless.”

The relationship is different and far more fruitful in welcoming Ukraine.

Since 1992, some 2,300 volunteers have served in more than 1,200 communities as teachers, management consultants, environmentalists and youth development specialists. More than 1 million Ukrainian citizens have received training in 18 years. Some volunteers even return to Ukraine or stay behind to keep working.

This group has volunteers from small towns like Skowhegan, Maine, and large cities like New York City. The younger ones, like Schimmer, are mostly recent graduates taking two years off before entering graduate school or the corporate world, while others are retired – the oldest is 79 – who are seeking an encore career.

“We’re not here to take away jobs,” said Douglass Teschner, the Peace Corps Ukraine country director, a former volunteer in Morocco. “Our teachers work side by side with Ukrainian teachers and jointly develop more progressive English teaching skills. We strengthen the Education Ministry’s curriculum with native speakers while developing the long-term capacity of teachers.”

Only about a third of applicants are accepted as volunteers. More drop out during training.

In Ukraine, volunteers receive a monthly living allowance of Hr 1,372 paid for by U.S. taxpayers. It’s enough to live on, but more importantly, they don’t live much better than many Ukrainians in their midst.

Additionally, they often live with host families who accelerate the language and cultural learning process. Expenses related to home stay are also paid for by the U.S. government.

Unlike in the 1990s and early 2000s when Ukraine volunteers were mostly sent to urban centers, today the vast majority get sent to underdeveloped rural towns.

“Volunteers are most needed in the rural areas, because rural residents don’t have the same advantages as those living in larger cities, plus they can make a bigger difference there,” said Iryna Byelayeva of the Family, Youth and Sport Ministry, one of three government bodies involved with providing volunteers with work sites.

The receptiveness of Byelayeva’s and other ministries has kept the demand high for volunteers.

“I get shivers down my spine every time I meet volunteers. Their can-do attitude and belief in their work makes me want to drop everything and join them,” Byelayeva said. “The Americans see opportunity and solutions to problems where we just see obstacles.”

The Peace Corps is part of what U.S. Secretary of State Hillary Clinton calls “smart power,” an attempt to revive a positive view of America’s standing in the world. Consequently, the Peace Corps is getting more attention in President Barack Obama’s administration – and more cash. On June 30, its budget was upped by 11.5 percent in 2011, to $446 million.

“I see the Peace Corps mission as a very important element of ‘smart power’,” said James Pettit, former deputy chief of mission of the United States in Ukraine. “I consider each volunteer an individual ambassador of the U.S.”

When Bostonian Daniel Burke taught conversational English and American Studies in Sumy in 1997-1999, Leonid Kuchma was president and Pavlo Lazarenko was prime minister.

“Back then we stuck out more, many [Ukrainians] never met foreigners, let alone Americans,” Burke said.

“Culturally it was about telling them that not everyone lived like the people shown on the Dynasty show. Government officials wanted to meet me; radio and TV stations wanted to interview us.”

Volunteers who did business consulting have entered the private sector. They include Rich Caproni (1996-1998), who is the chief financial officer of the Viasat satellite TV service company in Kyiv.

Courtney Zukoski consulted and taught in Simferopol and Zaporizhya in 1996-1998. She is now the director of academic and corporate social responsibility programs for Microsoft Ukraine.

Zukoski, a Virginian, said she volunteered for the long term benefits that no multinational corporation could offer her after earning a Master of Business Administration.

“I wanted hands-on regional business experience, foreign language skills, and a launching pad for continued international career opportunities, all the while having the opportunity to do something good for the world.”

In the non-profit world, Joseph Bednarek now is the educations programs manager and director of the International Research and Exchanges Board, which provides leadership and innovative programs to improve the quality of education.

Bednarek, from Indiana, taught English in Chervonohrad of Lviv Oblast in 1999-2001 after graduating from Georgetown University. Afterwards, he went to graduate school in Harvard but returned to Ukraine in 2007 after graduating because he wanted to “be a part of whatever was coming out of the Orange Revolution.”

One highly visible former volunteer in Ukraine is Jorge Zukoski, who served from 1996-1998 and is currently chairman of the American Chamber of Commerce in Ukraine, a business association.

The returned volunteers the Kyiv Post spoke with said many choose to work in Ukraine because they believe Ukraine is changing and can continue to change for the better.

Bednarek and Courtney Zukoski, Jorge Zukoski’s wife, said Ukraine feels like Europe, and that Ukrainians feel their country is a part of Europe.

“I think that mentality and, of course, the actual geographic proximity, helps to make Ukraine not feel as remote as other countries where volunteers have served, and thus makes living and working here for many years a much more attractive proposition,” Bednarek said.